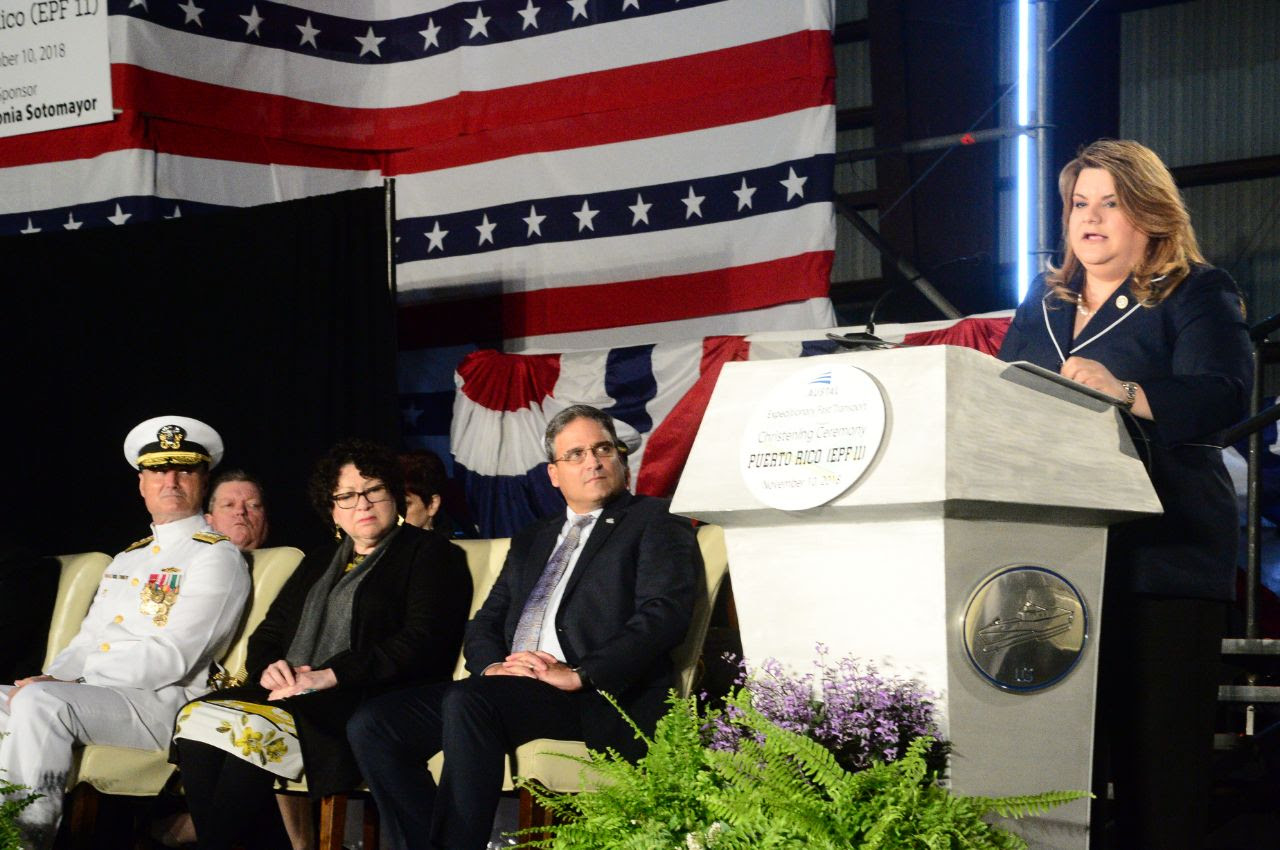 SAN JUAN – Congresswoman Jenniffer González Colón served as the keynote speaker at the christening of the Navy’s newest Expeditionary Fast Transport, USNS Puerto Rico (T-EPF 11), during a ceremony Saturday at the Austal USA shipyard in Mobile, Ala.

With an all-aluminum shallow-draft hull, the EPF is a commercial-based catamaran capable of personnel and cargo lift providing high-speed mobility with cargo handling capability and agility.

The $185 million vessel is a versatile transport vessel designed to operate in shallow ports or waterways, increasing operational flexibility for a wide range of operations including maneuver and sustainment, relief operations in small or damaged ports, flexible logistics support, or as rapid transport. 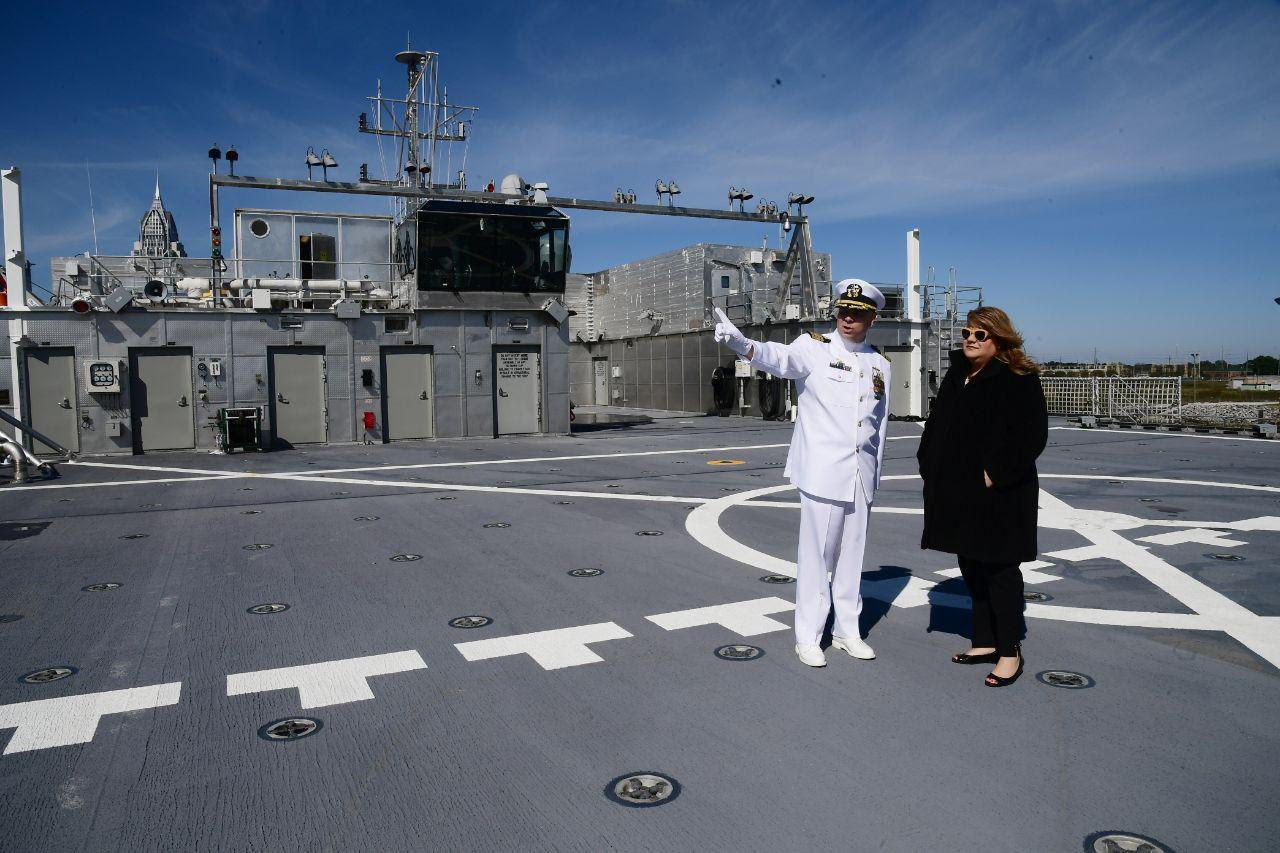 EPF class ships are designed to transport 600 short tons of military cargo 1,200 nautical miles at an average speed of 35 knots. The ship is capable of transporting 300 passengers for short distances or 104 for up to 14 days, and of operating in shallow-draft ports and waterways, interfacing with roll-on/roll-off discharge facilities, “and on/off-loading a combat-loaded Abrams main battle tank (M1A2),” according to the Department of Defense.

USNS Puerto Rico includes a flight deck for helicopter operations, can launch drones to support rescue and recovery operations and features an off-load ramp that allows vehicles to quickly drive off the ship.

The ship will have a base crew of 22 for its operation and daily maintenance, which expands to 41 when in theater, depending on the mission. 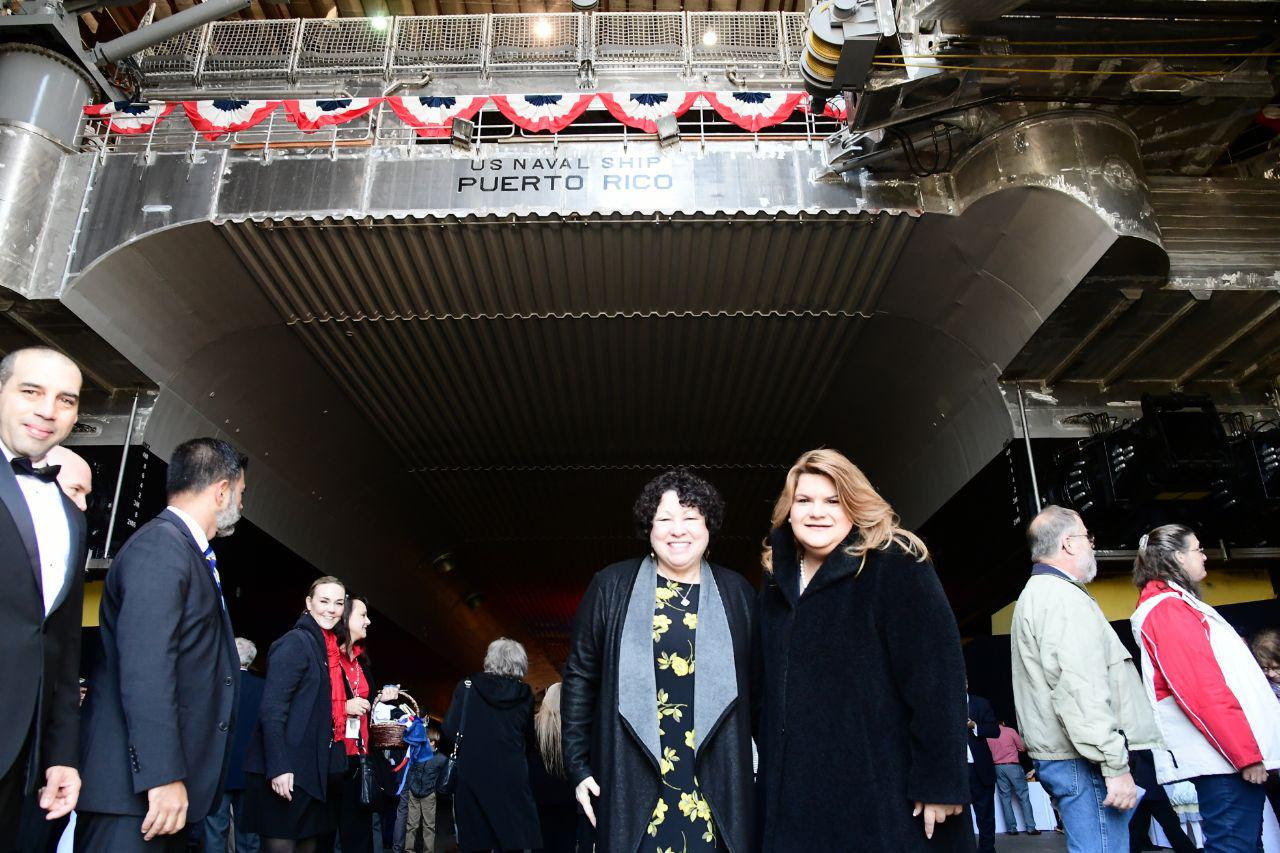 USNS Puerto Rico will join other vessels in the history of the Navy with names that allude to the island. These include the currently active USS San Juan submarine, the now-retired Amphibious Transport USS Ponce, the World War II Cruiser USS San Juan and the World War II repair ships USS Culebra Island and USS Mona Island.

USNS Puerto Rico will be the first active ship in naval service to honor the island in the West Indies east of Hispaniola. An Alaska class cruiser named Puerto Rico (CB-5) was authorized July 19, 1940, but construction was canceled June 24, 1943.

“The USNS Puerto Rico will be named after our beloved island, land of the people who have shown over and over again that we can cope with difficult trials and get ahead. A land of U.S. citizens who have proudly responded to the call of the nation to duty in the Armed Forces and the Merchant Navy for more than a century,” González Colón said.

The congresswoman added that “among them, there is one who, with his actions, confirms everything we know about the brave spirit of Puerto Ricans. Yamil Sánchez-Padilla has been selected to be the first officer of this magnificent ship when it enters service. When he learned about the christening of this vessel, he personally asked to serve on the USNS Puerto Rico. That is the spirit of us Puerto Ricans.” 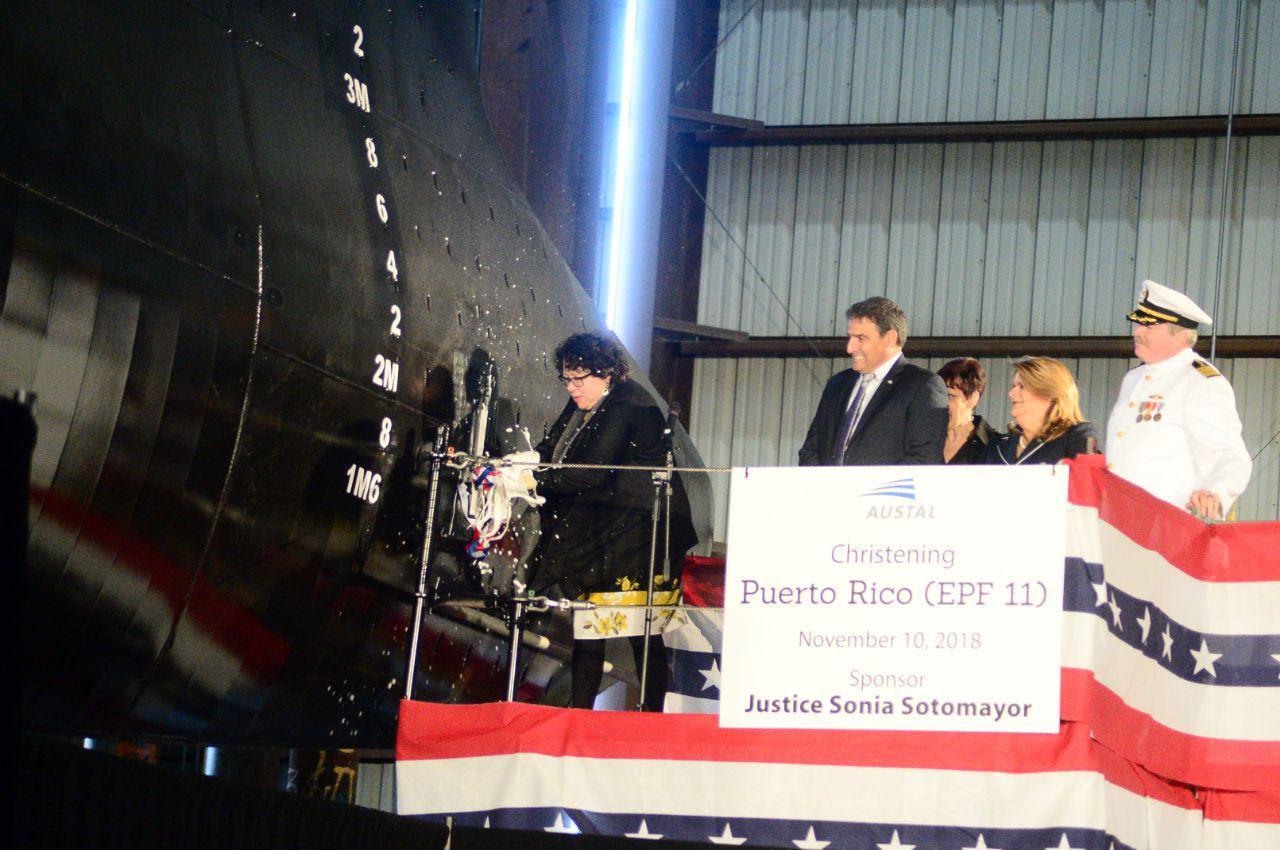 As part of the commemorative events, González Colon was joined by the ship’s sponsor, Justice Sotomayor, along with officers of the Navy and the Merchant Navy and executives of Austal USA, among others.

The ship, whose construction was approved at the end of 2016 and started last August, will now move to equipment installation and testing, after which the Navy will have its own testing period; Normally the T-EPF vessels of recent construction enter into regular operations 11 months to a year after their christening. 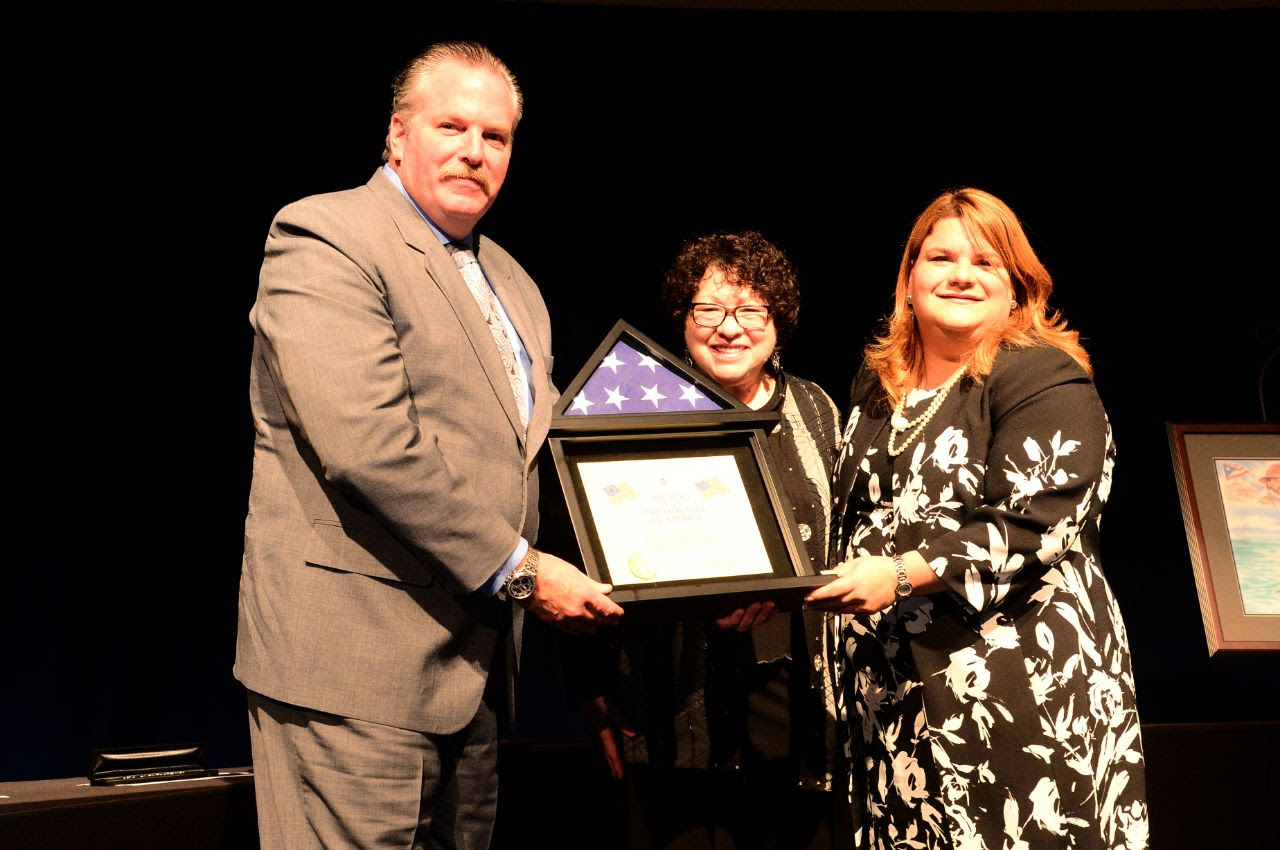 “This ship honors the Commonwealth of Puerto Rico and the contributions Puerto Ricans have made to our nation and Navy and Marine Corps team,” said Secretary of the Navy Richard V. Spencer said in a release before the christening ceremony. “USNS Puerto Rico will provide our commanders high-speed sealift mobility and agility and I am thankful for this ship, her crew, and our industrial force teammates whose service makes this great ship possible.”