Vineyards are lined up as a wildfire burns on a mountaintop in Napa, Calif. (AP Photo/Marcio Jose Sanchez)

NAPA, Calif. — Workers in Northern California’s renowned wine country picked through charred debris and weighed what to do with pricey grapes after wildfires swept through lush vineyards and destroyed at least two wineries and damaged many others.

The wind-driven wildfires erupted as Napa and Sonoma counties were finishing highly anticipated harvests of wine grapes. Normally, workers would have been picking and processing ripe grapes to make chardonnay and other wines.

Instead, melted and blackened wine bottles littered the ruined Signorello Estate winery in Napa Valley. Workers at the Paradise Ridge Winery in Sonoma County posted photos of debris and haze and said they were “heartbroken” to announce that the facility had burned.

A maintenance worker watched and hoped for the best Monday as flames crept down a hillside near the Gundlach Bundschu Winery. 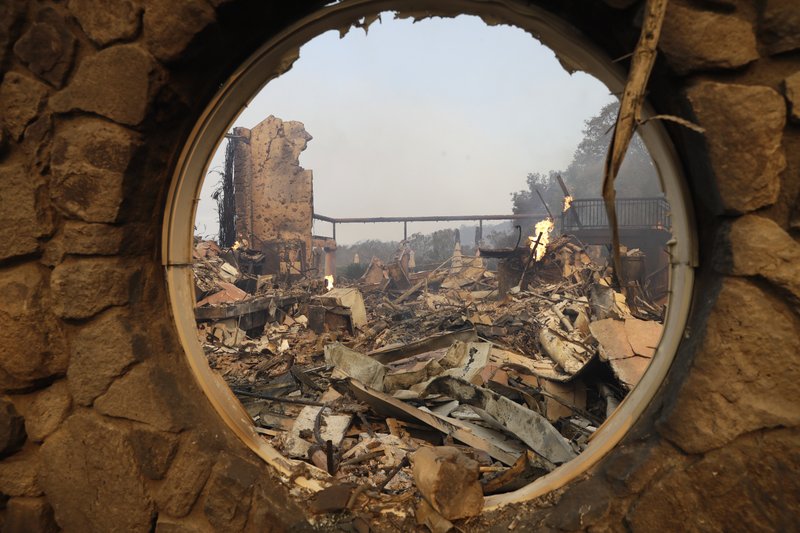 The Napa Valley Vintners trade association said Monday that most wineries were closed because of power outages, evacuation orders and employees who couldn’t get to work. The organization did not have firm numbers on wineries that burned or information on how the fires might affect the industry. But it said most grapes had already been picked.

About 12 percent of grapes grown in California are in Sonoma, Napa and surrounding counties, said Anita Oberholster, a cooperative extension specialist in enology at the University of California, Davis. But they are the highest value grapes that yield the most expensive wines, she said.

She was optimistic that the fires will not affect the wines to come out of this year’s harvest. Most of the grapes have been picked and of the ones still on the vine, smoke would have to be heavy and sustained to do much damage.

Even then, the damage would be limited to the fruit, not the vines. That means next year’s crop should be unharmed, Oberholster said.

Gloria Ferrer, Ravenswood and Kenwood were among well-known wineries closed for the day because of the fires, according to social media posts. Chateau Montelena Winery, which helped put California on the global wine map when it won a French wine-tasting competition in 1976, escaped damage.

Wineries that escaped damage struggled with the lack of power, which they need to process grapes.

“Some of our growers did pick for us last night. So we had to unload the fruit into our cold barrel room and wait until tomorrow to process it,” said Alisa Jacobson, vice president of winemaking at Joel Gott Wines.

“I think we’ll be OK, but it’s not an ideal situation. But more importantly, all our employees seem to be doing OK,” she said.

She said she was stunned by the speed of the fires after falling asleep around 10 p.m. Sunday only to wake during the night to the smell of smoke. By 3 a.m. people were being evacuated.

Lise Asimont, director of grower relations for the Family Coppola wineries, was among the people being urged to leave her Santa Rosa home. She said explosions woke her around 2 a.m. She opened the front door to a sky snowing ash.

Authorities told her family to prepare to flee, but Asimont was also worried about her grapes — four truckloads of machine-picked cabernet sauvignon fruit. The crop was in Lodi on Sunday with no way of getting to Coppola facilities Monday because of a closed highway.

She called a winemaker with LangeTwins winery and vineyards, who had a tank available to crush the grapes and was happy to be able to help. In turn, she passed on the favor to another winery.

“There’s a lot of people helping each other, which is amazing,” she said.