By Andrew Taylor and Martin Crutsinger

WASHINGTON, D.C. — President Donald Trump Tuesday is unveiling a $4.1 trillion spending plan that relies on faster economic growth and steep cuts to programs for the poor in a bid to balance the government’s books over the next decade.

The proposed 2018 budget was already under attack by Democrats and even some of GOP allies declared it dead on arrival. The proposal is laced with cuts to domestic agencies, food stamps, Medicaid, highway funding and medical research. The proposal projects that this year’s deficit will rise to $603 billion, up from the actual deficit of $585 billion last year. But the document says if Trump’s initiatives are adopted the deficit will start declining and actually reach a small surplus of $16 billion in 2027. However, that goal depends on growth projections that most economists view as overly optimistic and a variety of accounting gimmicks, including an almost $600 billion peace dividend from winding down overseas military operations.

The government hasn’t run a surplus since 2001 and deficits spiked during former president Barack Obama’s first term in the aftermath of the Great Recession.

During the campaign, Trump attacked the weak economic growth of the Obama years, and pledged that his economic program would boost growth from the lackluster 2 percent rates seen since the recovery began in mid-2009. Trump’s new budget is based on sustained growth above 3 percent, sharply higher than the expectations of most private economists. Without more than $2 trillion in such “economic feedback” over the coming decade, the budget would never reach balance and would run a deficit of almost $500 billion when Trump promises balance.

“The president believes that we must restore the greatness of our nation and reject the failed status quo that has left the American dream out of reach for too many families,” the administration said in its budget which was titled, “The New Foundation for American Greatness.” 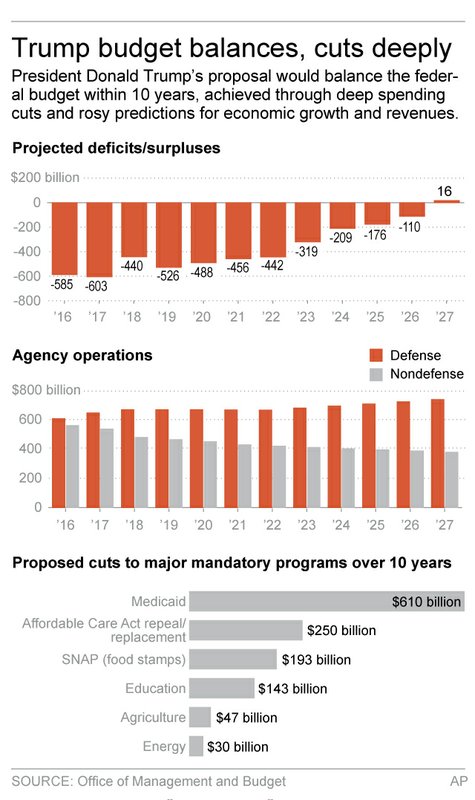 According to budget tables released by the administration, Trump’s plan cuts almost $3.6 trillion from an array of benefit programs, domestic agencies and war spending over the coming decade — an almost 8 percent cut — including repealing and replacing Obama’s health law, cutting Medicaid, eliminating student loan subsidies, sharply slashing food stamps, and cutting $95 billion in highway formula funding for the states. Cuts to a popular crop insurance program have already landed with a thud.

A program designed to move people receiving Social Security disability payments back into enter the workforce is politically toxic as well. Administration officials defended these measures as a way to reduce government support they contend is keeping millions of Americans out of the work force and thus reducing economic growth.

Food stamp cuts would drive millions from the program, while a wave of Medicaid cuts could deny nursing home care to millions of elderly poor people.

The budget does feature a handful of domestic initiatives, including a six-week paid parental leave program championed by Trump’s daughter, Ivanka. Another $200 billion in federal infrastructure investments is promised to leverage another $800 billion in private investment.

Trump would keep campaign pledges to leave core Medicare and Social Security benefits for the elderly alone but that translated into even deeper cuts in programs for the poor such as Medicaid and food stamps.

Medicaid, the government insurance program for the poor and many disabled Americans, would be cut by more than $600 billion over 10 years by capping payments to states and giving governors more flexibility to manage their rosters of Medicaid recipients. Those cuts go on top of the repeal of Obamacare’s expansion of the program to 14 million people and amount to, by decade’s end, an almost 25 percent cut from present projections.

Other cuts in Trump’s budget include reductions in pension benefits for federal workers, in part by requiring employees to make higher contributions. In agriculture, the proposed budget would limit subsidies to farmers, including for purchasing crop insurance, a move already attacked by farm state lawmakers.

On taxes, Trump promises an overhaul that would cut tax rates but rely on erasing tax breaks and economic growth to avoid adding to the deficit. It would create three tax brackets — 10 percent, 25 percent and 35 percent — instead of the current seven and promises to lower the corporate tax rate to 15 percent.

But the budget has virtually no detail to prove it would deliver on Trump’s promise for “massive” tax cuts.

The new budget plan builds on Trump’s March proposals, adding details to his goal of boosting defense spending by $54 billion, a 10 percent increase, for this year, with that boost financed by an equal cut to nondefense programs.

Mulvaney said that part of the savings, listed in the budget as $1.4 trillion over 10 years, would come from a “two-penny plan” which will cut non-defense discretionary spending by 2 percent each year over the next decade.

Such cuts — which include “zeroing out” programs like community development block grants and heating aid to the poor — were ignored when Congress earlier this month wrapped up a massive spending bill for the current year.