Kristine Pond reacts as she searches the remains of her family’s home destroyed by fires in Santa Rosa, Calif. (AP Photo/Jeff Chiu)

SANTA ROSA, Calif. — An onslaught of wildfires across a wide swath of Northern California broke out almost simultaneously then grew exponentially, swallowing up properties from wineries to trailer parks and tearing through both tiny rural towns and urban subdivisions.

Authorities said that at least 10 people are dead, with 100 injured, and as many as 1,500 homes and businesses have been destroyed. All three figures were expected to surge in the coming days as more information is reported.

Taken as a group, the fires are already among the deadliest in California history.

Residents who gathered at emergency shelters and grocery stores said they were shocked by the speed and ferocity of the flames. They recalled all the possessions they had left behind and were lost. 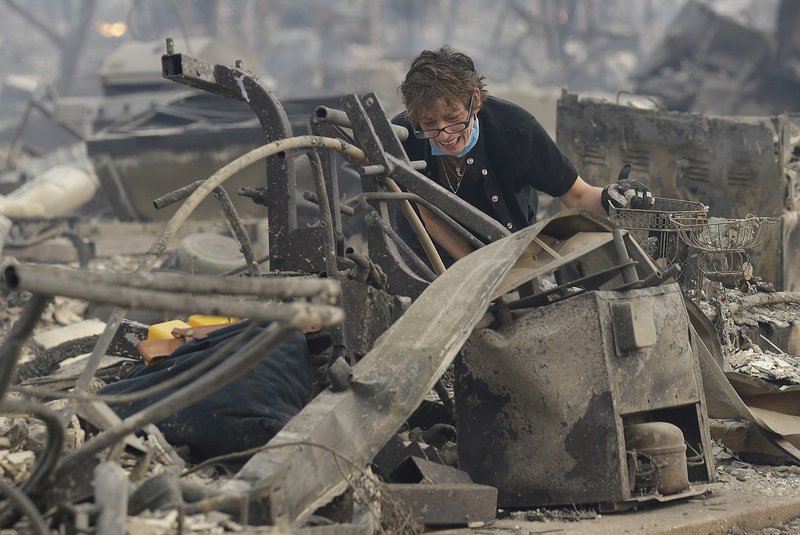 “All that good stuff, I’m never going to see it again,” said Jeff Okrepkie, who fled his neighborhood in Santa Rosa knowing it was probably the last time he would see his home of the past five years standing.

His worst fears were confirmed Monday, when a friend sent him a photo of what was left: a smoldering heap of burnt metal and debris.

Some of the largest of the 14 blazes burning over a 200-mile region were in Napa and Sonoma counties, home to dozens of wineries that attract tourists from around the world. They sent smoke as far south as San Francisco, about 60 miles (96 kilometers) away. 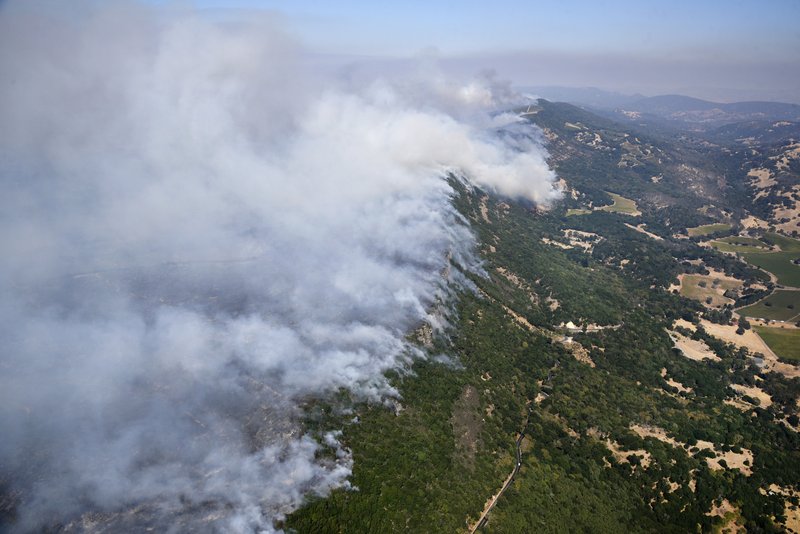 Smoke rises as a wildfire burns in the hills east of Napa. (Michael Short/San Francisco Chronicle via AP)

Sonoma County said it has received more than 100 missing-person reports as family and friends scramble to locate loved ones.

The reports have come via calls to a hotline the county set up for the missing, according to Scott Alonso, communications director for Sonoma County.

It’s possible that many or most of the missing are safe but simply can’t be reached because of the widespread loss of cell service and other communications.

Much of the damage was in Santa Rosa, a far larger and more developed city than usually finds itself at the mercy of a wildfire. The city is home to 175,000 residents, including both the wine-country wealthy and the working class.

The flames were unforgiving to both groups. Hundreds of homes of all sizes were leveled by flames so hot they melted the glass off of cars and turned aluminum wheels into liquid.

Former San Francisco Giants pitcher Noah Lowry, who now runs an outdoor sporting goods store in Santa Rosa, was forced to flee in minutes along with his wife, two daughters, and a son just over 2 weeks old.

“I can’t shake hearing people scream in terror as the flames barreled down on us,” Lowry said.

His family and another evacuating with them tried to take U.S. 101 to evacuate but found it blocked by flames, and had to take country roads to get to the family friends who took them in.

A 90-mile (145-kilometer) stretch of the highway is framed by the flames and a major concern overnight, said Brad Alexander, a spokesman for the California Office of Emergency Services.

Highway 12, which winds through the heart of wine country, was also rendered unusable by the flames.

The ferocity of the flames forced authorities to focus primarily on getting people out safely, even if it meant abandoning structures to the fire.

Firefighters rushed to a state home for the severely disabled when flames reached one side of the center’s sprawling campus in the historic Sonoma County town of Glen Ellen.

Crews got the more than 200 people from the threatened buildings, one firefighter said, as flames closed within a few dozen feet.

The flames were fickle in some corners of the city. One hillside home remained unscathed while a dozen surrounding it were destroyed.

Kim Hoe, a 33-year-old tech worker from Penang, Malaysia, was staying at the Hilton Sonoma Wine Country, which was gutted by flames. He said the power went out around 1 a.m., and he and his colleagues started packing up when someone knocked on the door and told them to run.

“We just had to run and run. It was full of smoke. We could barely breathe,” Hoe said.

The large majority of the injured were treated for smoke inhalation, according to St. Joseph Health, which operates hospitals in the Santa Rosa area. Two were in critical condition and one was in serious condition. The number of injured is expected to climb as information comes in for all the other areas affected by the firestorm consuming the state.

October has generally been the most destructive time of year for California wildfires. What was unusual Sunday, however, was to have so many fires take off at the same time.

Other than the windy conditions that helped drive them all, there was no known connection between the fires, and no cause has been released for any of them.

But the conditions late Monday and early Tuesday were calmer than they were 24 hours earlier, bringing hopes of progress against the flames.

To the south in Orange County, more than 5,000 homes were evacuated because of a fire in the Anaheim area. The blaze had grown to nearly 10 square miles and had destroyed 24 structures.